The valuable Cartmel Cup, which has proved a benefit for Cumbrian trainers since it was introduced into the calendar, celebrates its 10th anniversary with a new sponsor on the opening day of the August Bank Holiday fixture at Cartmel.

It has been a clear sign of the progress of the Lake District’s only racecourse that as well as expanding the race programme from one day to nine in the last 50 years, the quality of the racing has kept pace.

The support of William Hill, who are the new betting partner for Cartmel racecourse, ensures that the Cartmel Cup remains among the vanguard of top quality races at the track.

First run in 2009, the race has produced six Cumbrian winners in its nine year history, including a hat-trick for local trainer James Moffatt, who scored with Smart Ruler in 2014 and followed up by landing the prize with Captain Brown in each of the next two years.

Captain Brown’s hat-trick bid petered out last year when he finished seventh in an eight-runner race won by Beeno, who was trained by Kenneth Slack for his father Arthur and ridden by Robert Hogg.

That completed the sixth Cumbrian win, a tradition started by Slack’s sister Dianne Sayer, who won the first two runnings of the race with Front Rank in the colours of her husband Andrew.

With all the other winners having come across the border from Yorkshire, it is clear that the North holds sway here on a course which takes some riding as the greatest of them all (William Hill ambassador) Sir Anthony McCoy remembers.

AP was only an occasional visitor to Cartmel in his riding days, but twice in recent times registered five winners in the track’s short season. 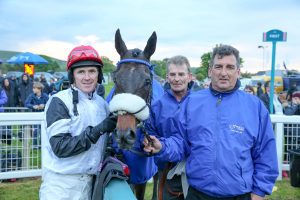 The William Hill Cartmel Cup is the big race of the opening day of the August Bank Holiday fixture on Saturday, August 25 before the 2018 season comes to end at the course on Monday, August 27.